Luncheon meat. We have a love-hate relationship with this one. Yes, it’s not known to be the most healthy of things to eat, but like instant noodles and boxed Mac & Cheese, you do crave it once in a while and it can taste so good (may our hearts forgive us).

Marc, especially, loves luncheon meat. He makes this at least once a month, so much so that he basically cooks on automatic. It took ages of begging for him to finally write the recipe down. We call it the Luncheon Fusion as we take this humble canned processed meat and give it the Indian spice treatment. While spam isn’t traditional Indian fare, we find that this dish goes so, so well with rice and sambar dhal (Indian lentil stew) or even rasam, which is a deliciously tangy South Indian soup.

We’ve tried many different brands of luncheon meat and find that ‘Ma Ling’ simple holds up the best in both taste and texture. It isn’t too salty, and the processed meat itself holds its shape nicely, even when sliced or cubed, so you don’t end up with a crumbly mess at the end. Be wary at the stores though, as we’ve found several different brands with the same orange and blue packaging. 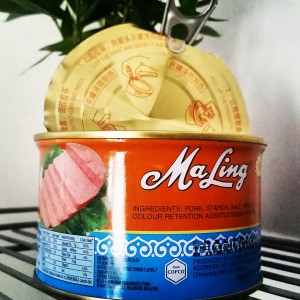